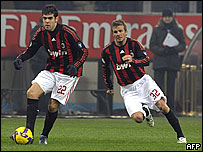 David Beckham has urged Kaka to stay with Milan
Fancy earning 赚 a million dollars a week for playing football?

That’s what Brazilian midfielder Kaka could be earning if he moves from AC Milan to Manchester City.

Deep-pocketed 非常有钱的 Manchester City have made no secret 众人皆知 of their desire to buy Kaka, a former FIFA World Player of the Year, with some reports speculating 猜测 that he could be sold for a staggering 惊人的£100m (992m yuan).

This would easily make him the world’s most expensive player, smashing the previous record 大大超过历史纪录 set when France’s Zinedine Zidane moved from Juventus to Real Madrid in 2001 for £46m (456m yuan).

Newly-rich 近来暴富的 Manchester City, who were taken over by a multi-billion pound Arab consortium 资产上亿的阿拉伯财团 last year, sent a delegation 代表团 to Milan on Monday to try and seal the deal 敲定核实合同后签约.

Man City boss Mark Hughes said it is a case of now or never.

“You have to react quickly when the opportunity comes to acquire a player of that standard. You can’t hang about and think, ‘we’ll wait until the next window.'”

To hang about means to wait and see. Mark Hughes was saying that you have to be decisive if you want to sign 签约 a player of Kaka’s stature 声望.

Despite his determined attitude, Hughes admitted they are still “a million miles away from actually concluding the deal.”

Mark Hughes, who is known by the nickname Sparky, said that there has already been a lot of idle speculation 谣传 about the money involved in this deal.

With reports quoting figures ranging from £91m (901m yuan) to 108m (1.07bn yuan), Hughes said, “People are plucking numbers from the sky, doubling them and adding a zero.”

Whatever the exact amount, if Kaka does go it will be for a lot of money. This has raised a lot of eyebrows 使很多人震惊 both in the football world and beyond. Some commentators have said it is obscene for any football player to earn a million dollars a week, no matter how good he is.

The financial world has also questioned the economic viability 经济可行性 of this move.

Keith Harris, chairman of investment bank Seymour Pierce said: “In a world where football chairmen and finance directors are tightening their budgets ahead of a year of great uncertainty, here is a group that is prepared to splash out this type of money.

“The transfer market for players is cut-throat and we should be entering a period of restraint.”

To splash out means to spend a lot of money, often with little consideration. When he described the transfer market as cut-throat, he meant that it is not only very competitive, but also that people would use ruthless tactics to get what they wanted.

David Beckham, who is currently on loan 被借调 at AC Milan and playing alongside Kaka, also expressed his views on the potential deal, saying that Manchester City are too small a club to attract world-class 世界级 talent like Kaka, no matter how rich they are.

“For me, United are the only team in Manchester.

“It’s not always about money. It’s about playing for the best team, playing with the best players in the world and winning trophies and being successful.”

Meanwhile, as if to reinforce 加强，支持 Beckham’s words, Manchester United went top of the Premier League after beating Bolton 1-0 this weekend.

Dimitar Berbatov’s 90th-minute goal sealed the win as United displaced 换位置Liverpool at the top of the table.